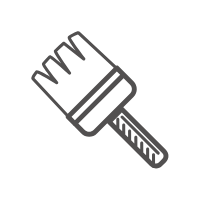 Repainting a home's walls is the fastest way to change the look of your interior without spending a small fortune. But, before the painters can do their job, the walls have to be prepped ready for painting. The material offered on this website is all about painting walls. Getting rid of mould, repairing damaged skirting boards, removing old flaking paint and other pieces of paining know-how are all provided to you so that you have the information and tools you need to prepare the walls of your home. If the wall is not properly prepped before painting, the paint will not cover it flawlessly, so put this advice to good use in your home.

Some rooms in your house suffer from condensation more than others. For example, kitchens, bathrooms and laundry rooms are most likely to have this problem. While you may already know that using a specialist washable paint can help prevent some problems in these rooms, it's also worth looking at paints that have anti-mould properties. How do these paints work and why should you use them in your home?

How Does Anti-Mould Paint Work?

An anti-mould paint goes on like any other paint. It looks the same. However, these products contain additional ingredients such as biocides. When a wall contains biocides it gets protection against mould growth. The biocides stop mould from growing on walls by preventing it from germinating. This protection isn't permanent; the biocides will wear off after a few years. However, while they work, the paint should be able to inhibit mould so a room's walls and ceilings stay clear. While people often buy paint that contains anti-mould additives, it is also possible to add mould inhibitors to other types of paints before they are applied. The paint then has the ability to prevent mould growth.

If you have a lot of condensation in one or more rooms in your home, then you may have already had some mould problems. Mould thrives in damp and humid areas. It doesn't matter how well you clean these rooms. If your condensation levels are high enough, you could end up with growth on the walls and ceilings. As well as looking ugly, mould can affect your health and even the surfaces it lives on.

While you can clean mould off surfaces and treat them to inhibit future growth, this isn't always a long-term fix. If you still have a lot of condensation, the mould could come back pretty quickly. If you use an anti-mould paint, then you stop this growth in its tracks. Its biocides will also work on other similar problems such as mildew. You'll also find that anti-mould paints give you a better finish for rooms like bathrooms and kitchens. These paints are usually very durable and washable. They are generally easier to care for and clean, which is useful in rooms that have a lot of surface condensation.

If you need more information about an anti-mould painting solution, talk to local painters. They can recommend paints for your rooms and apply them to give you protection.